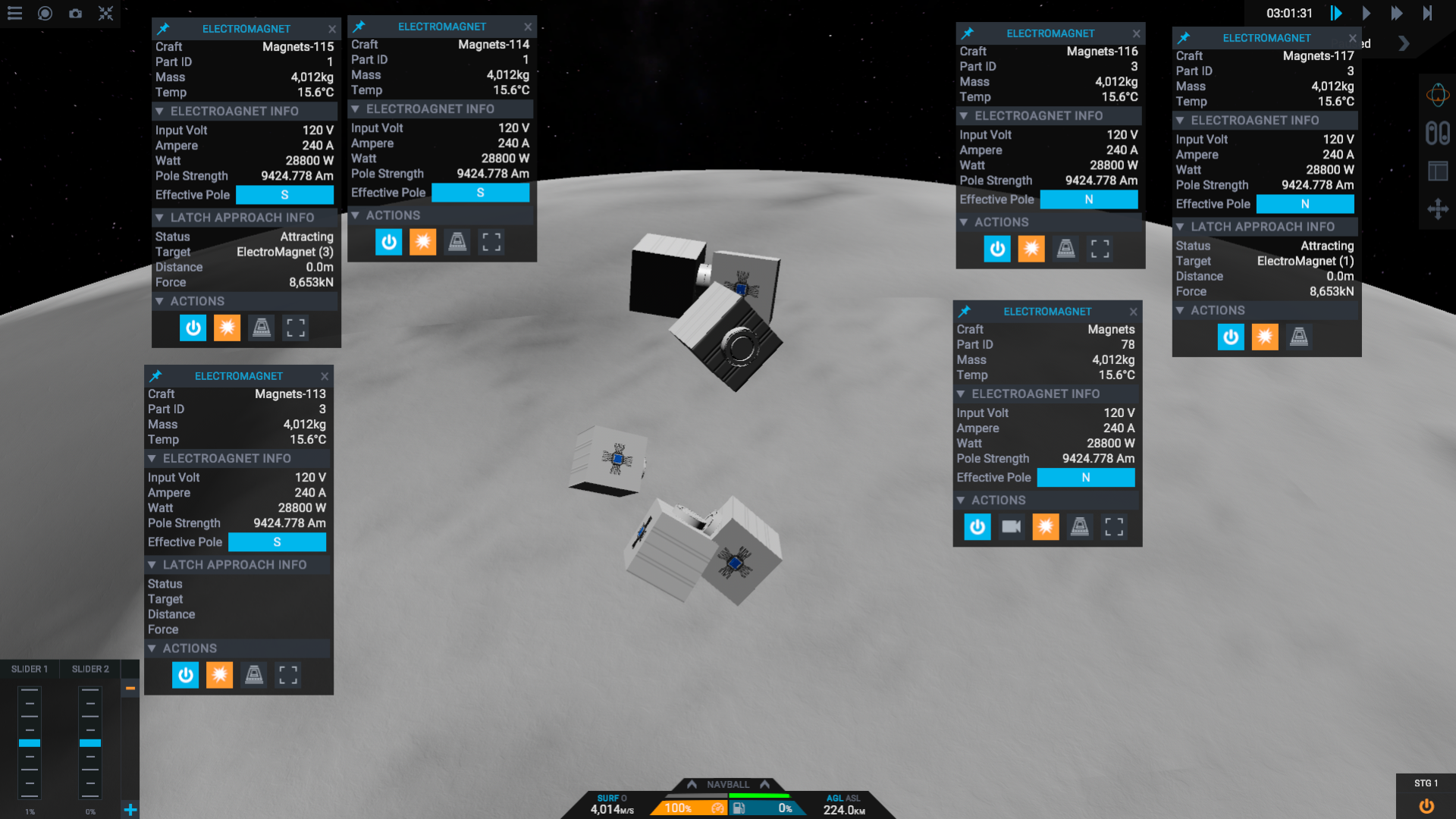 Fixed in 0.12
- Typo (Electroagnet info) was fixed
- If you have a craft with magnets from older version, this will breaks your craft! You can manually open your craft xml and change every InternationalDockingSystemStandard.ElectroMagnet to PhysicallyMeasuredInstruments.ElectroMagnet to fix it.

Fixed in 0.11
- Power Consumption in 0.1 was 1,000 times higher than it should be.
- Fixed some string units to enhance readability

12 Magnets At Once Locking Test

This mod adds an Electromagnet part with poles. They can interact with other electromagnets, push and pull, consuming electricity. Unlike stock analogue or Docking Port, they don't interact with one at once; If you have 12 active magnets in your flight scene, they interact with all 12 at once(*1).

The force between 2 electromagnetic poles are calculated with this formula;

Since I'm employing Gilbert Model and not simulating B-Field nor H-Field, the magnetization of paramagnetic is not currently supported. This means the magnets can't magnetize other metals nor other deactivated electromagnets. You have to turn both electromagnets to make them interact.

2. Is this a new Docking Port?

Yes and no. You can use this magnets to lock(dock) 2 spacecrafts, but this doesn't work like how stock Docking Port works.

If they are attracting each other and both of them have same sized latch, they can lock into each other like a stock docking port. After lock, the both magnets would turn off automatically to save electricity. This means you have to click Unlock button on the inspector to unlock; turning off the magnets would not do the job.

The main difference of this magnets and stock Docking Port are two; stock Docking Port has not magnetic force but spring force, so the force between two goes weaker when they get closer. This means, however, they can attract the other at much greater distance than magnets. Electromagnets, however, has proper (Gilbert) magnetic force, so the force goes stronger when they get closer. This means less fiddling at the end of docking procedure, but you have to get closer to get the effective magnetism.

The other major difference is they're come with in-built latches if you enabled them. With the latches, they align with the other. If you're dealing with huge and complex space stations, you might not love this or want them to align less aggressively. Let me know your opinions.

*1: Magnets on same collider groups can't interact with each others.

Known Issues
- After Lock Completion, the craft tumbles on a random direction.
- The part has no price.

You can use this source code as you want under the license.