So you can just tell the game what to do, such as:

I've been working on this task for a couple of weeks now. I started the project with the intention of making a simple flight planner with a set of instructions that would be executed one-by-one until finished. That quickly grew into much bigger plans for a visual programming system with support for loops, conditions, and variables. Now, the more accurate name for this would be a Visual Flight Programming System, which I have nicknamed Vizzy. I've also held onto the original inspiration for simplicity so that players that don't want to assemble a complete program can simply snap blocks together to make a simple flight plan. However, advanced players can take advantage of the additional complexity to create very complicated programs.

Here's a snapshot of a prototype of "Vizzy" the visual programming system I'm working on. Obviously, highly influenced by Scratch, Snap! and Turtles: 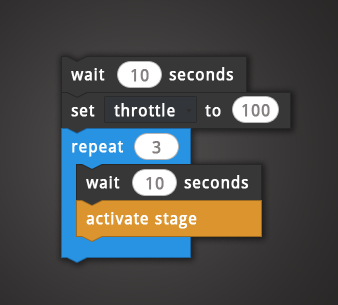 I've still got quite a bit of work to do, but with any luck, this will make it in the next update. We'll see.